On August 16, 2016 the Whitesburg, Kentucky, staff kicked it into full gear to help the family of a man who went missing in July. As a sign of support, people in the community flooded the Whitesburg Pizza Hut in order to raise money for the family. Tina, the store’s RGM, said the phones did not stop ringing once the restaurant opened. 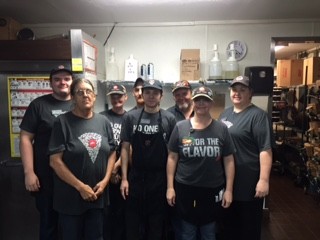 A ton of thought and preparation goes into pulling off such a large fundraiser. When the team started receiving calls about the event two days prior, they knew they’d have a huge event on their hands. Tina and the team pulled out all the prep tactics used for a Super Bowl Sunday. The truck orders were increased. Any prep that could be done prior to the big day, was. The team topped boxes, roasted wings, bagged pasta, fronted 2 liters with door hangers, and made sure that panned cookies and brownies were ready to go. Back up change and extra register tape was at each order entry station. Extra sauces, prepped veggies and salad were prepped and ready to go. The only thing left to do on the big event day was topping pizzas and giving GREAT customer service to the community.

Super Bowl Sundays have yielded an average of $4,000.00 in sales in previous years in this traditional small town restaurant. This event, however, topped Super Bowl Sunday as well as their fundraiser history with more than $5,000.00 dollars in sales. This Whitesburg team rocked the Hut and they plan on doing it all again. Amazing prep, service and sales! Those who are close with the family say the love and support is appreciated. Thanks again, Tina and team!