On a rainy Tuesday afternoon in Blue Springs, Missouri, more than 30 people packed into the small front-of-house area of Store 4701. The weather outside was dreary, but the atmosphere inside was anything but. Leaders from PHI and NPC were there to surprise RGM Sandy Frick with one of the most prestigious awards in the Pizza Hut system, the Folino Life Unboxed Award. 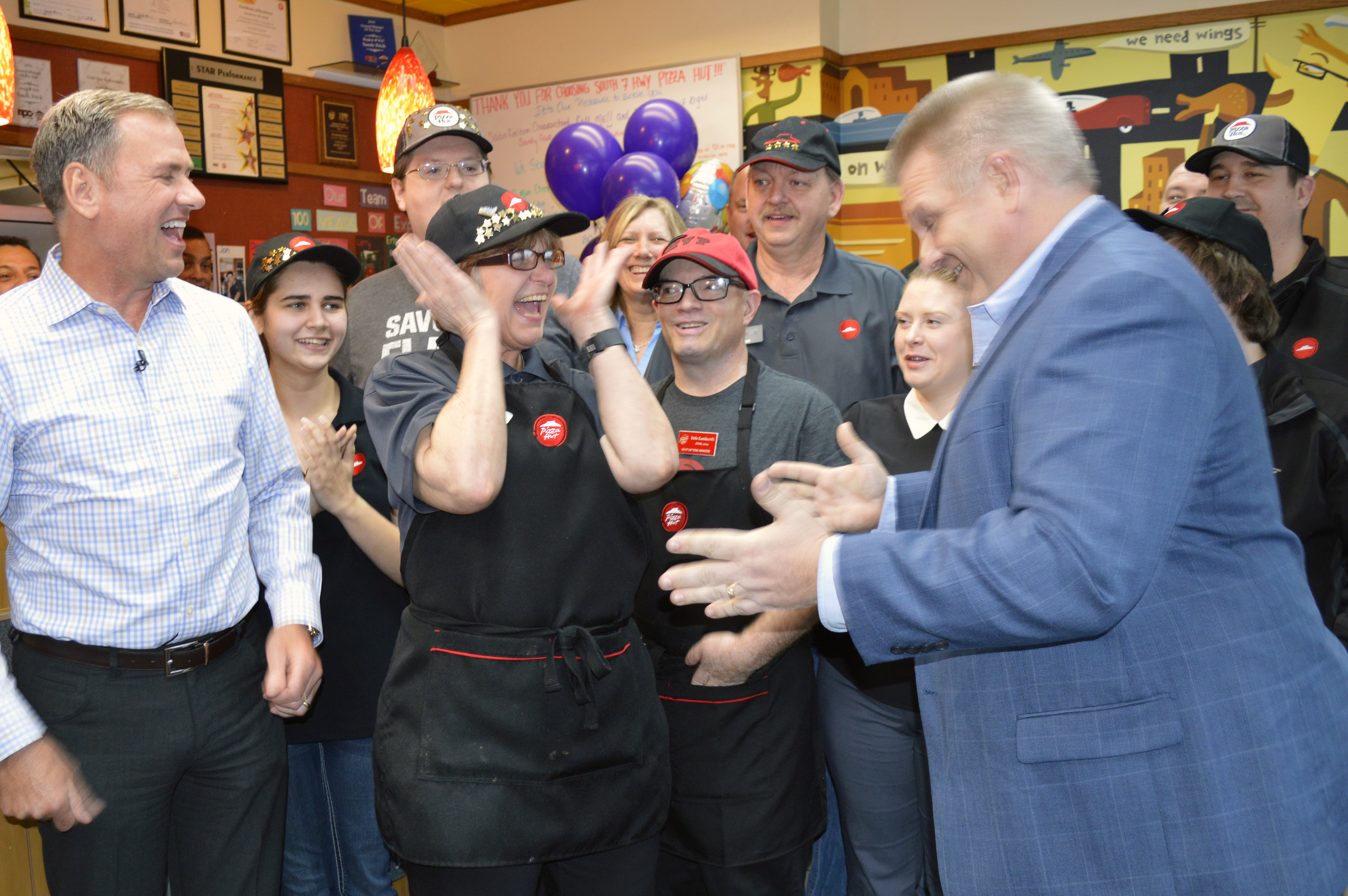 Each year, the Folino Life Unboxed Award recognizes a top-performing RGM who leads by championing culture-driving initiatives within the restaurant as well as in the community they serve. The Folino Award honoree makes it a priority to enhance the team member experience, and in turn, the customer experience.

Sandy Frick has been doing this for more than four decades. A leader, mentor, coach and advocate for her teams for 41 years, Sandy approaches every day with boundless energy and an intense determination to deliver FUN in the lives of her customers and her employees.

Sandy is beloved by her teams and a respected voice within her Area, Region and across the company. When asked to describe Sandy, former Team Member Eric Bolinger responded, “Every good adjective in the book.”
If that doesn’t paint a good enough picture, here are a few specifics from Team Members past and present: 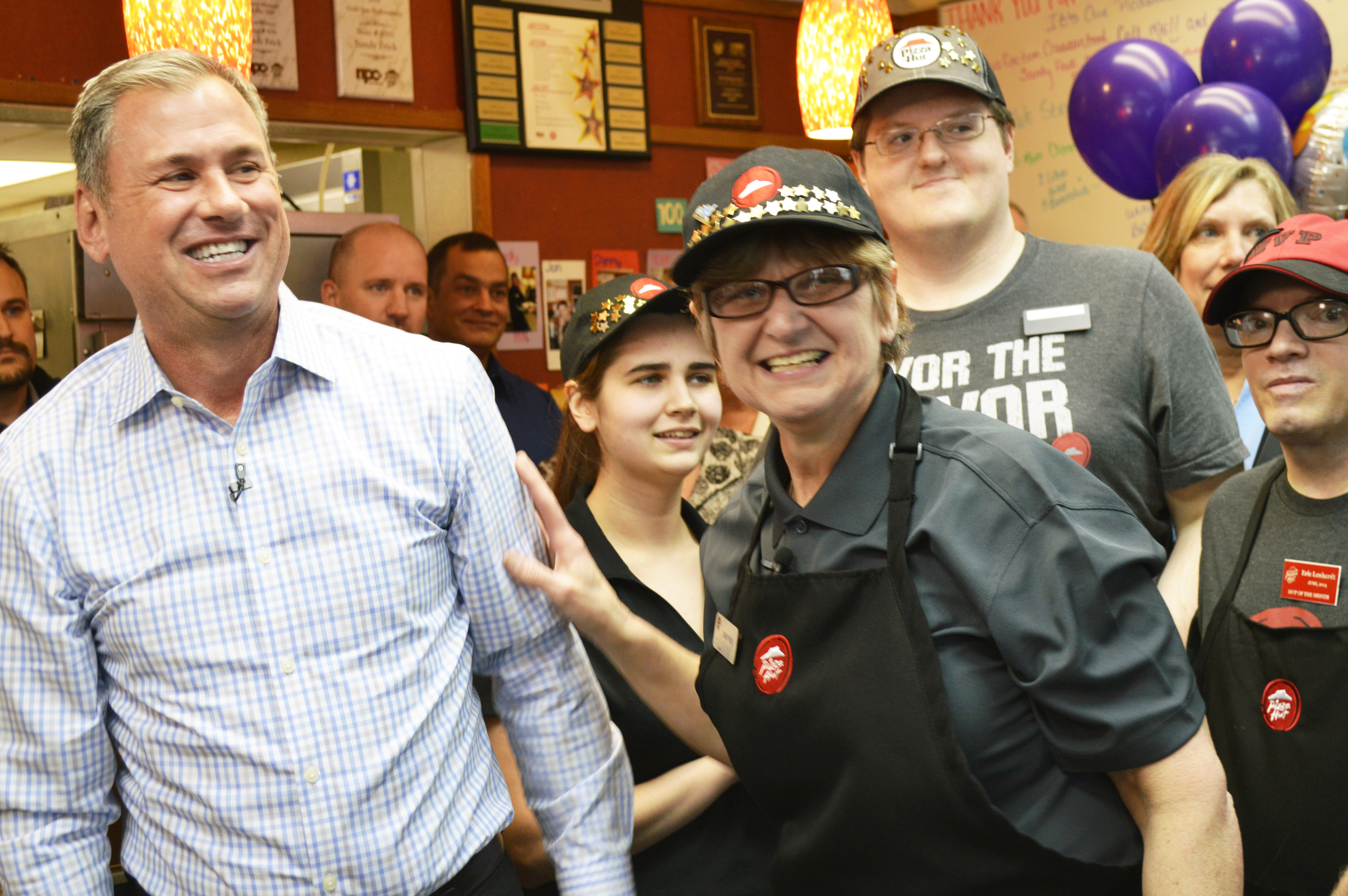 Eric Bolinger is now RGM of his own store down the road from Sandy, and even though they no longer work in the same restaurant, Sandy and Eric still speak almost every day. “Sandy is my mentor,” Eric said. “She trained me, she showed me how to lead people, how to run a business properly. My success, I owe a lot of it to her.”

As a Certified Training Manager for 25 years, Sandy has trained many leaders throughout NPC. In fact, there are currently nine RGMs and three Assistant Managers in position who were trained by Sandy. She is constantly developing new employees for the Region and Area, while also coaching the Team Members and Junior Management within her store. 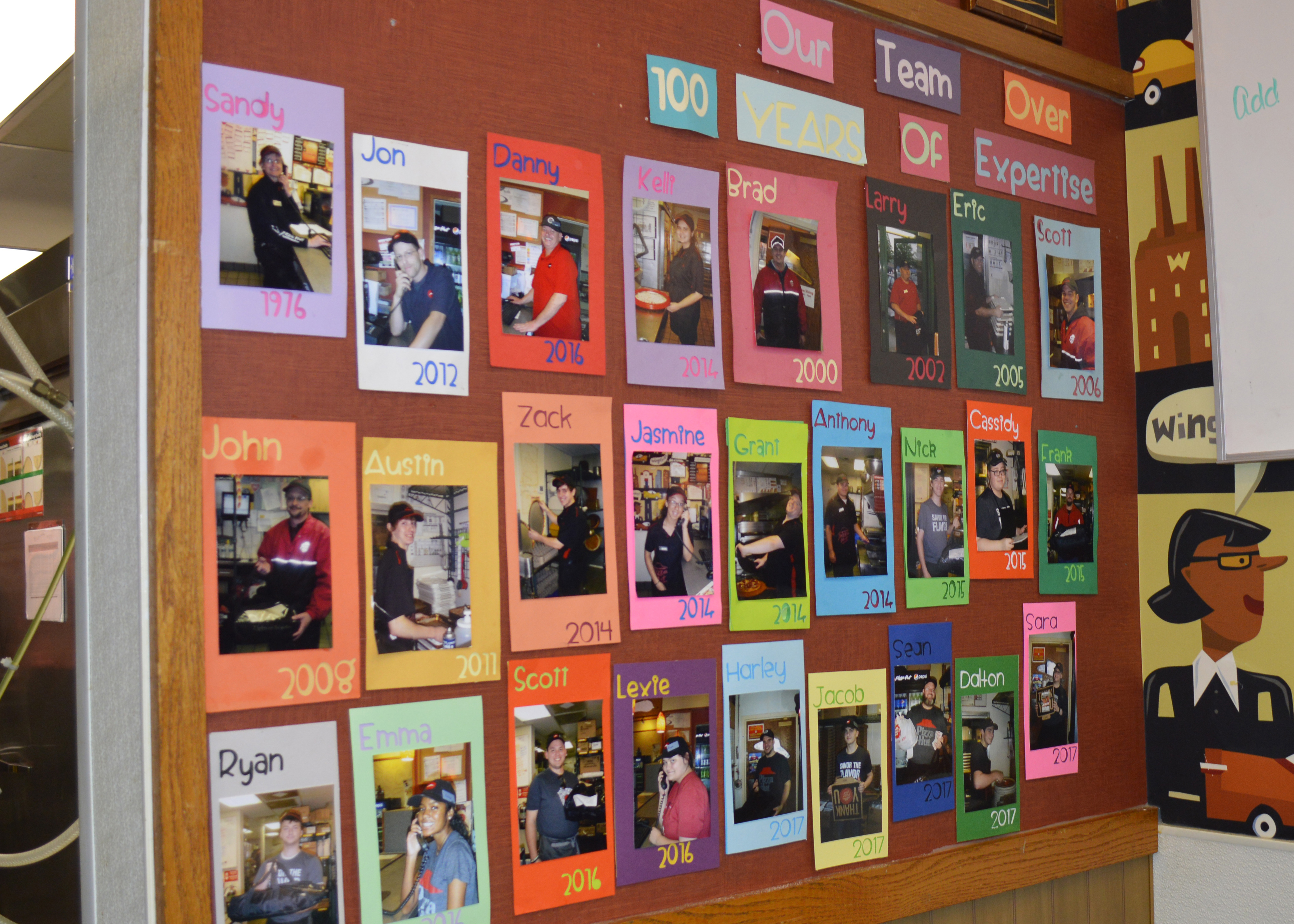 Human Resource Leader, Rhonda Bryson said, “I have known Sandy for more than 30 years, and in my tenure, I have utilized her as a resource more times that I could count. She is always willing to help others, giving great advice and support to anyone who reaches out to her.”

Sandy’s high standards and the effort she makes toward training and engaging her team have translated into world class customer metrics. In 2016, Sandy’s team achieved 88.85% Under 39, 3.6% Bottom 2 Box, grew comp sales 5.07% to $1.1mm and had just 27% Annualized Turnover. Additionally, Sandy’s HQSC results were “Excelling” and she earned 100% on FSCC. She had the top Scorecard in all of NPC last year, and she was recently selected as the “RGM of the Year” for her Area and the “RGM of the Year” for the Midwest Region.

“Sandy Frick is the perfect example of what makes our NPC Family so special – amazing people,” Jim Schwartz, NPC’s President and CEO said. “Spend two minutes in her store and you’ll understand what I mean. She has created a culture where our purpose of delivering FUN is brought to life every single day. Her high standards and commitment to the team and the business inspire her team to deliver exceptional results year after year.” 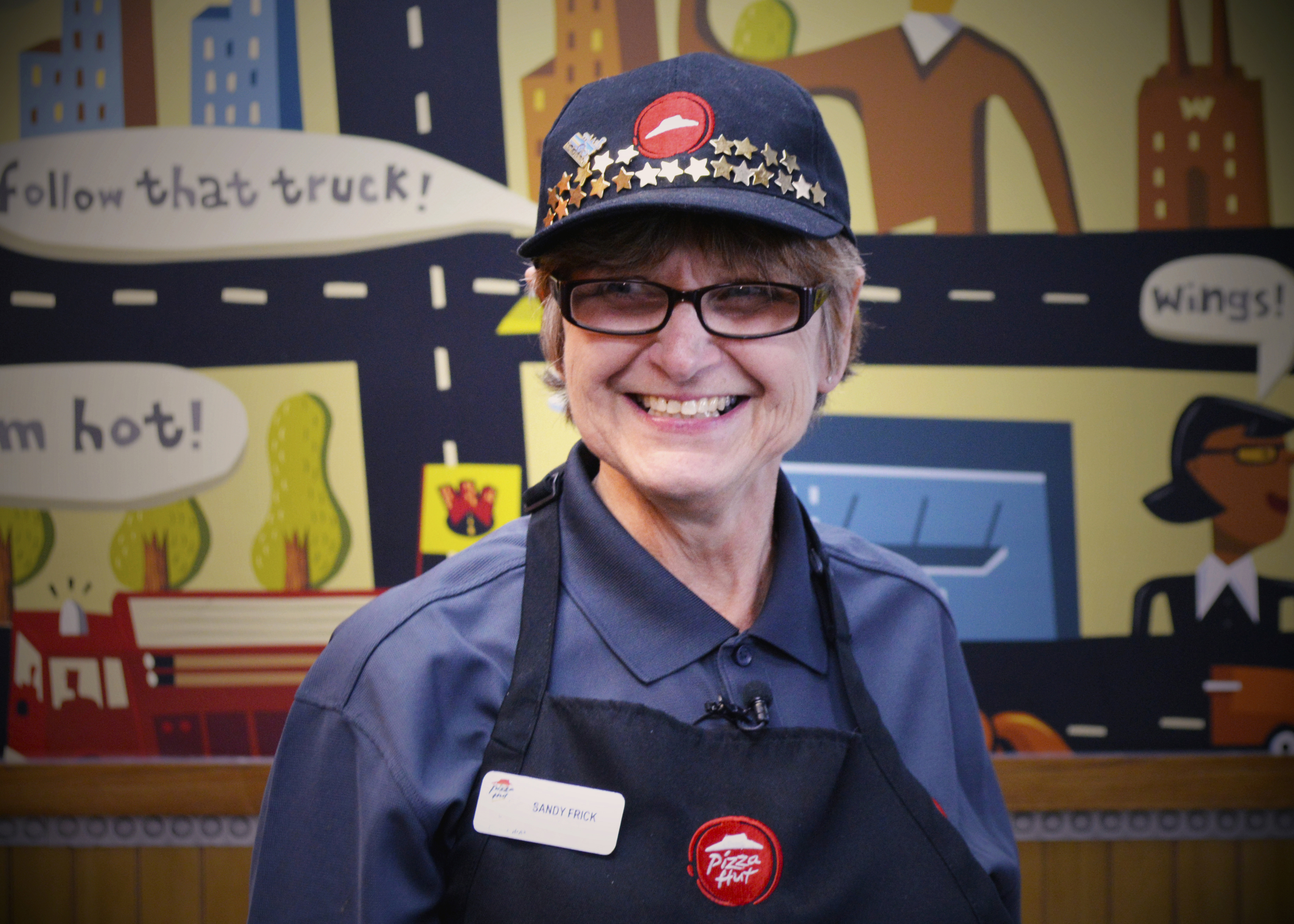 In addition to leading within her four walls, Sandy’s commitment to her community is unrivaled. She is passionate about giving back and participates in countless marathons and half marathons in support of the organizations she cares about. Sandy is especially supportive of cancer awareness, Big Brothers Big Sisters, suicide prevention and children in foster care. To date, Sandy has participated in 65 marathons in more than 27 states.

During the award celebration in her store, Sandy was awarded with a $1,000 bonus from Pizza Hut, a $5,000 bonus from NPC and an additional $5,000 from NPC for Sandy to donate to the charities of her choice. Sandy will also receive a trip for two to the 2017 IPHFHA Spring Conference. 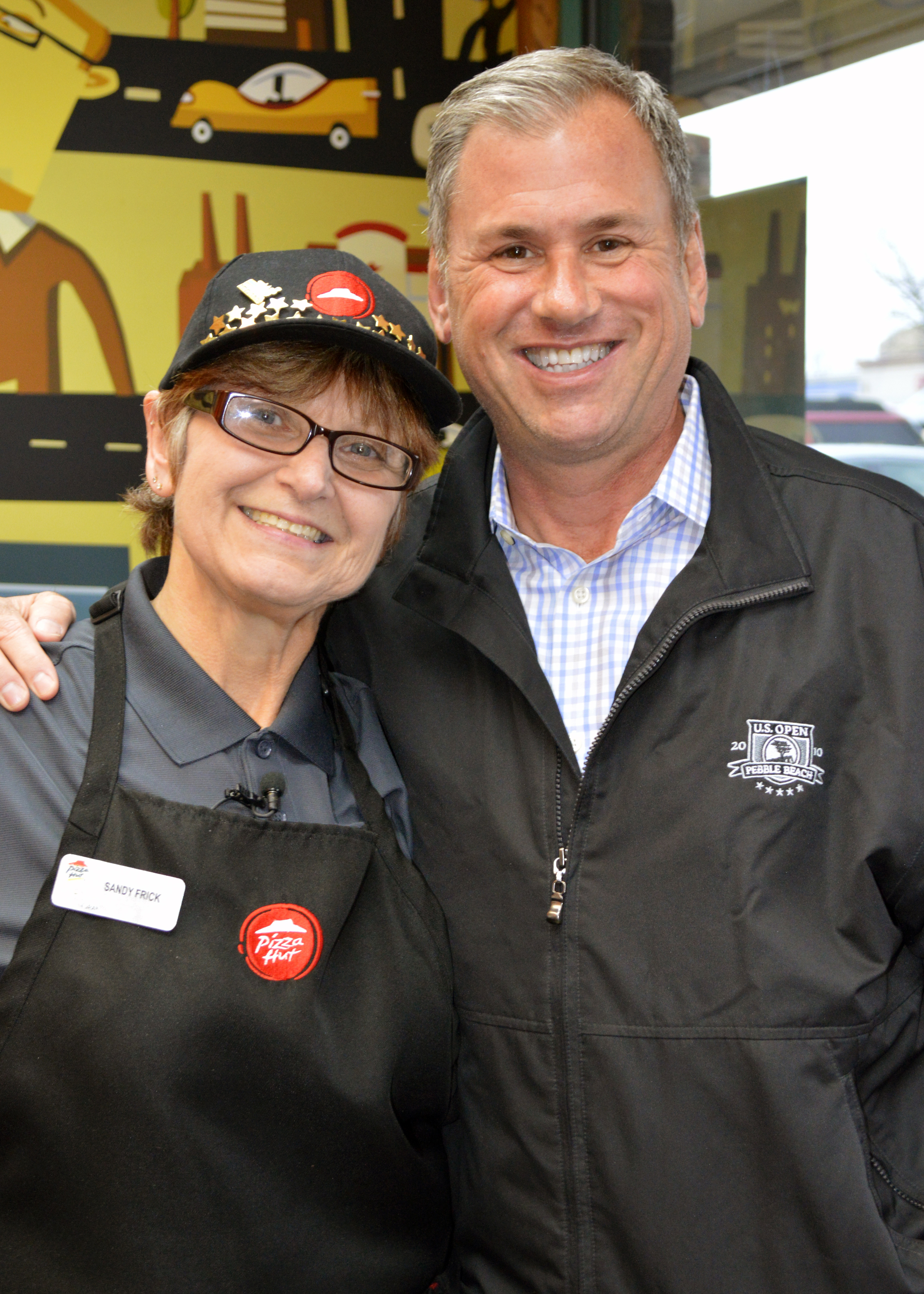 Across her 41 years, Sandy has displayed an unrivaled commitment and dedication to the brand and to the NPC Family. She started as a server for Pizza Hut – her first job – and grew into a career she loves. Sandy’s incredible belief in people, teamwork and high standards for operations have led to her to great success year after year.

Congratulations on this much-deserved award, Sandy! We are all so proud of you!