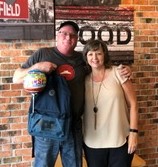 A few weeks ago, NPC Pizza Hut delivery driver Mark Belcher went above and beyond to save a woman whose life was in danger. While delivering pizzas, one customer he visited wrote a call for help. Without hesitation, Mark called local authorities and got her out of a dangerous situation.

Mark says he can still remember every detail of the note he got from that woman. He added it’s something that will stick with him for a while.

“It was written on a very small piece of paper. It was written in eye liner, like she was hiding in the bathroom,” Mark said. “’Please call Tanya’ — and she wrote down the number. ‘Call 911 and tell them my life is in danger.’”

The Cape Coral woman was using his delivery stop as a cry for help in an abusive situation.

“The only hesitation I had was leaving — leaving to go and call — because I didn’t know what he was going to do to her,” Mark said. “It wasn’t about making hasty decisions —Adrenalin was going … it was calm down, do what she asked.”

Mark followed her directions, called her sister and the police, who responded quickly.

“It’s still in my head a lot,” Mark said. “How many people like that could be in danger, and that’s there only way to inform someone that they need help? It’s not ‘hero’ to me — it’s like, ‘wow.’ It brings back the emotions of helping someone without really thinking about it.”

In their report, the officers mentioned the bruises she had on her arms and back.

“I do worry about her — I know she got out of there safely and I hope she’s doing great,” Mark said.

He said he hopes his simple actions will remind everyone to be a little more observant, because the next call for help could be yours.

“If you’re a person like me — doing deliveries — make contact with your customers. Just be observant. Care about people.”